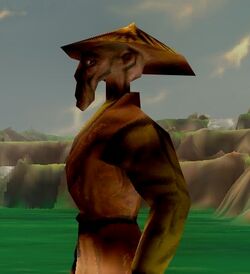 The Talan are the native sapient race of the world of Adelpha. They have a complex culture, and a long history!

The Talan share their basic shape with humans, but there are a number of differences. The Talan head is very different, and they typically have brownish skin! They have only two fingers on each hand, two toes on each foot, it is important to note that they have no thumbs!

Young and female Talan live on the island of Kizaar. Every few hundred moons the doors are open to the island and males are allowed to come and mate, this continues for five moons! When mating ceases the males take young Talan with them who are ready to undergo Conversion at the Well of Essence. The only males allowed on the island between times of mating are Shamaz.

The culture of the Talan is highly religious, their worship focused on four Yods, Fae, Eluee, Gandha, and Ka.

The four Essences are Fae (fire), Eluee (water), Ghanda (earth), and Ka (air), named for the yods that govern them! The balance of the essences is extremely important to the health of the world and the Talan.

The Talan began to use essence when the First Talan was converted at the Well of Essence. He came to the well curious as to what was inside it, when he stood close the essence energy that comes from the well washed over him, converting him to a Ka Talan!

Soon after this he was able to use his new essence to heal other Talan! Later all Talan began to go to the well. They discovered that Talan under a certain age could not get their essence yet, the led to the conversion ceremonies when young Talan came of age!

Community content is available under CC-BY-SA unless otherwise noted.
Advertisement